Star's latest example of an 'embellished and inaccurate' headline

The front page of Saturday's Daily Star boasts an 'exclusive': 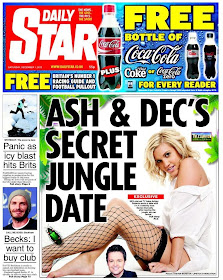 'Ash and Dec's Secret Jungle Date'. It's yet another story from I'm A Celebrity which has been on the front page of the Star almost every day since the series started.

Sex-starved TV babe Ashley Roberts wants a date with I'm A Celebrity host Declan Donnelly after leaving the jungle, we can reveal.

This comes two days after the Leveson Report said, in a section on 'deliberately misleading headlines' in which the Star gets several mentions (p.682):

What seems clear is that, faced with a fiercely competitive market, some titles have found themselves on the wrong side of the line between an attention-grabbing but accurate headline and an embellished and inaccurate headline.

Thanks for taking the time to leave a comment.

Comments are moderated - generally to filter out spam and comments wishing death on people - but other messages will be approved as quickly as possible.